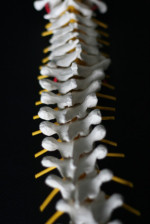 Chiropractic is concerned with the relationship between the structure (primarily the spine) and function (primarily coordinated by the nervous system) of your body and how that relationship affects your health. In the late 1800s, Daniel David (D.D.) Palmer, who founded Palmer College, researched this relationship. His hypotheses and subsequent discoveries laid the groundwork for modern chiropractic healthcare.﻿

Misalignments of your spine and poor health

﻿No part of your body escapes the dominance of your nervous system. Improper function of the spine due to slight misalignments—called subluxations—can cause poor health or function, even in areas far removed from the spine and spinal cord itself. Misalignments can also reduce the ability of your body to adapt to its ever-changing environment. Even the slightest malfunction of your spine may alter the regular transmission of nerve impulses, preventing that portion of your body from responding optimally.﻿

Chiropractic is a natural form of health care that uses spinal adjustments to correct these misalignments and restore proper function to the nervous system, helping your body to heal naturally. Chiropractic doesn't use drugs or surgery. Rather, a chiropractic spinal adjustment—the application of a precise force to a specific part of the spinal segment—corrects the misalignment, permitting normal nerve transmission and assisting your body to recuperate on its own.﻿

At the end of the 19th century, when D.D. Palmer came on the health care scene, medicine was leaving an era of proclaimed cure-alls to pursue more scientific investigation into the treatment of disease. D.D. reasoned that the body had an ample supply of natural healing power transmitted through the nervous system. If a single organ was sick, it must not be receiving its normal nerve supply. That led to the premise of spinal misalignment, or subluxation, and from there to a procedure for adjusting the vertebrae. D.D. performed his first adjustments in 1895, relieving one man of deafness and another person of heart trouble. Arrangements were made to train others in the application of the chiropractic principle. The Palmer School and Cure was founded in 1897 and was later incorporated under the laws of Iowa. The school later became the Palmer School of Chiropractic.﻿

﻿A guiding influence in B.J. Palmer's life was his wife, Mabel Heath Palmer, who became a Doctor of Chiropractic in 1905. A recognized authority on anatomy and an instructor at the school for more than 30 years, Mabel Palmer was a close and valued adviser to her husband in all phases of the chiropractic profession. 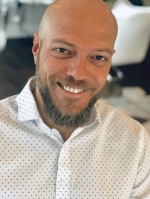